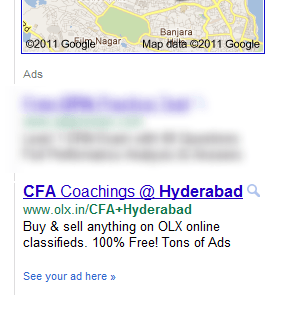 I was checking on my list of target keywords on Google for both SEO and SEM, when I chanced upon “CFA Hyderabad” where we are doing good on both the paid rankings as well as the organic rankings. When I was checking the ad, I noticed that one of the ads was by olx (in case you do not know about this site, do not bother to find out!).

They have recently started advertising in a heavy way (even on TV as well).

Buying advertisements so you could sell your advertising platform? Really? Is that how effective your platform is, that you have to pay to get traffic?

Or are you just trying to siphon off traffic from one of the market leaders?

In fact not quite sure whether they are directly in the advertising space, somewhere between Craigslist and e-Bay. I still wonder, why will anyone pay good money to put advertisements on this site? 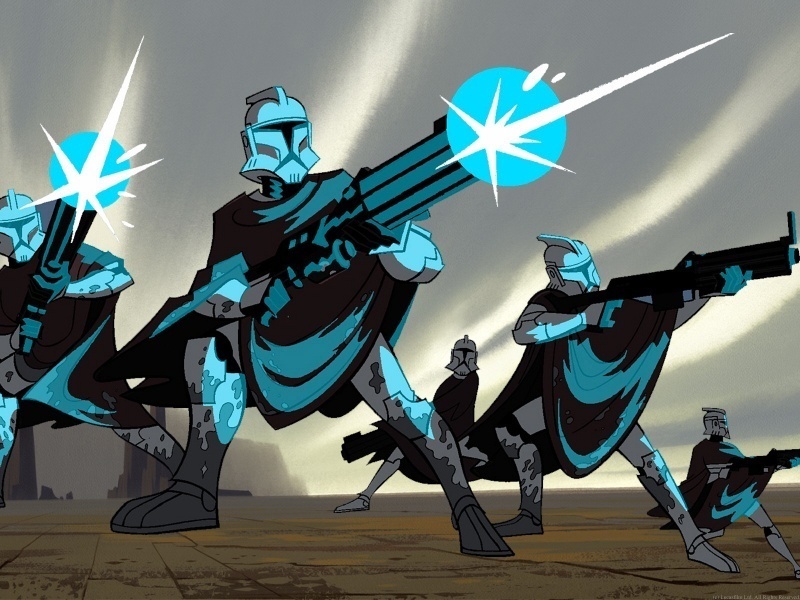 People were happy, they got good deals, saved some money. Good … but meh! Perhaps their launch was before time. Avante Garde.

A multi-billion dollar valuation, e-commerce 2.0 buzz, social media tongues wagging about. It was the next big thing since the Internet.

I guess over a period of time, folks soon realized that the business model was pretty simple really. Get bulk, negotiate with vendors and give back a small share back to the users. That was also the eYantra model. I hear its gotten its second round of funding as well.

Followed by a slew of Groupon clones … there are too many of them really to name a few. The unfortunate thing is that not one of them is willing to call themselves a Groupon mee-to. We are different is what they all say.

Everybody on this planet is unique, just like 7 billion other people.

If you thought that I would be writing another nerdy review of Star Wars, you are mistaken, Ser.

With Groupon clones sprouting everywhere on the Indian e-commerce scene, its going to be a war out there. The war is going to be played out in our inboxes, on our cellphones, on our social media pages and in our tweets. Our credit cards will be the trophies, each transaction a battle on who will get us the cheapest deal. If you thought that it would make me happy, its not.

All the discounts in the world are not worth the beauty of a spam free life. It’s been ages since I have seen an empty inbox, gotten no sms-es. The Clone Wars are on, and you are the next battle!

With the Indian economy shifting from an agrarian focus to a service-based industry, a lot of foreign investors are attracted to the nation. However, the sustainability of this is under question. As service experiences from bad to worse and consumers are crying bloody murder in the courts, how will the Great Indian Dream be achieved?

The word service comes from the term – to serve, i.e. to work for another.

I am sure you will agree with me that this is hardly the case these days. To measure the quality of service, all service providers have come up with an excuse called as SLAs (Service Level Agreements). What it means is that the service provider is giving certain time limits for each of his failures, and he won’t recognize the failure until and unless that SLA has been crossed.

Ironically, its very logical and you can’t argue against this. But zoom out a bit and think seriously, if you are providing SLAs for life and death services, what would happen? I won’t call you sick, until you have been sick for three days. Dead until, you have been dead for a day.

I won’t spring into action until and unless the given time goes by.

I will ignore your pleas, until you start shouting murder at me. Then I will create tickets, and play the game of the escalation matrix. Then I will care, and once the issue is resolved, I will stop caring.

As consumers, what can we do?

At a friend’s wedding, I heard about this new approach to one’s job. The man was talking that his employee’s are peace time soldiers, “eh?!?” I went. The idea is that many employees approach their job in a fashion like peace time soldiers … they assemble in formations, they do their drills, they salute to their seniors and when no one is looking, they relax and goof around. Having done this myself, I could not disagree … so what does one do to get out of this rut? The answer is simple … go to war!!

During war, soldiers are willing to give their lives (in this case their jobs) for a particular purpose. Employees should identify the purpose for which they will strive hard and achieve or else give their jobs. That gives them the true drive at work, an achievable goal and also a reality check. If an employee cannot come up with any such purpose, then you can be rest assured that he/she is already looking out for different opportunities and is not really pulling his/her weight around.

I tried this tactic with myself at my office, with wonderful results. Not only am I making goals clearer for myself, but also I am sending out a message to everyone else whom I am working with as to what drives me and what is my top priority.

So what are you willing to die for?

During my brief stint with eYantra, our foundation team did some cool stuff. We also made more than our fair share of blunders. I am just putting it down in one place, so that oth ers can benefit from our experience. On reflecting back, I am glad this happened because it was an eye opener in more senses than one. It was also a stint which significantly boosted my confidence.

I worked there for a span of two years, and had to come back to Mumbai because of personal reasons. What happened after that I only came to know through small and infrequent chats with the employees there. Enough to realize that I need to share this with everyone to benefit from the collective’s insights.

The list will be re-visited upon and your comments will be integrated into this. Thanks in advance.

Don’t reduce the pay of your urrent employees in the pretext of the variable, rather introduce as a part of your next round of appraisal.

DOs would be to “find a valid differentiator” and have your “goto market strategy well in place”.

Every idea needs its own time and grooming. It is important to be persistent enough. Take suggestions though, but dont rely on them. Dont give up just because you lost patience or because some one said so. Come to the office every morning thinking this is going to be the best day ever.

don’t reduce the pay of your urrent employees in the pretext of the variable, rather introduce as a part of your next round of appraisal

Yesterday, I attended Startup Saturday … the theme was Social Media and how it can be leveraged by start-ups effectively.

Some of my key learning –

Will attach the respective presentations as and when the organization committee puts them online :)