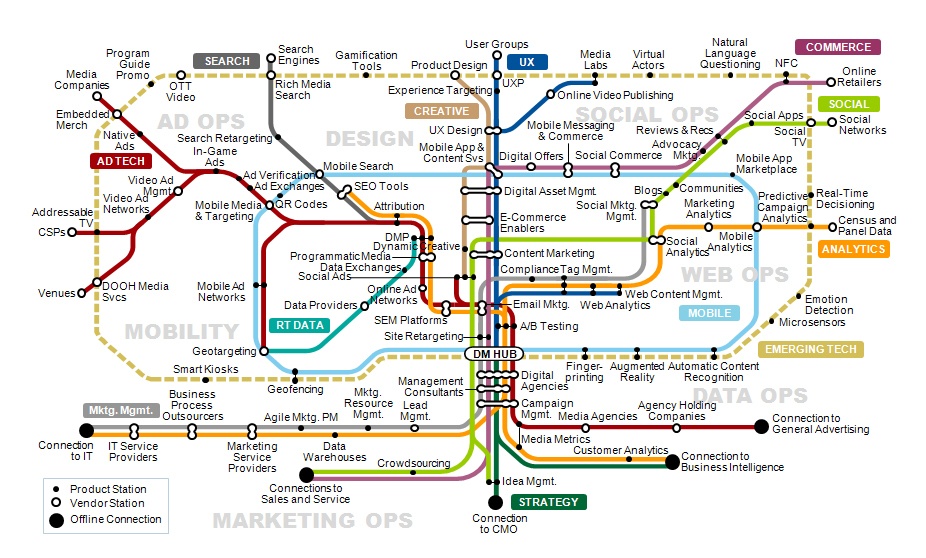 This is a little late publishing this post (it should have been 2 years back), however, my appreciation of this map has improved, and I thought it would be a good time to talk about the Gartner Digital Marketing Map.

Back when 13 Llama was being incepted, we were not sure of what was it that we wanted to do. There were so many things that we could, and how would we decide on the path to stick to.

As the organization grows from one stage to the other, this decision keeps cropping up. Recently (and I am not even sure if we are completely done thinking through this yet!), I had to revisit this decision.

When stuck in such situations, a map comes handy. It lets you know which path to tread upon.

I am reminded of the poem by Robert Frost –

TWO roads diverged in a yellow wood,
And sorry I could not travel both
And be one traveler, long I stood
And looked down one as far as I could
To where it bent in the undergrowth;

Then took the other, as just as fair,
And having perhaps the better claim,
Because it was grassy and wanted wear;
Though as for that the passing there
Had worn them really about the same,

And both that morning equally lay
In leaves no step had trodden black.
Oh, I kept the first for another day!
Yet knowing how way leads on to way,
I doubted if I should ever come back.

I shall be telling this with a sigh
Somewhere ages and ages hence:
Two roads diverged in a wood, and I—
I took the one less traveled by,
And that has made all the difference.

When faced with so many options, the question we faced was how to navigate and choose the right positioning for the firm.

This is where the Gartner map comes in handy. We knew which tracks we wanted to keep (in our case it was UX and Analytics), the rest was just following those tracks to their logical conclusion! In those two years since, we have moved from being an IT Service provider to becoming a Digital Agency.

The map also helped us figure out what kind of projects/clients we did NOT want to take. For e.g Social Media Analytic figures in our things of interests, but managing Social Media Fan Pages does not. If we have to do Social Media on its own, we would not choose to do so .. however, if given an option to focus on the Analytics part of Social Media, we would be happy to do so!

How to use the Gartner Digital Marketing Map

Either you chart out where you stand on the map currently and look at where you want to go to … pick-up the tracks that take you there and see if you have those capabilities within the organization. For e.g if I wanted to evolve 13 Llama from a Digital Agency to a Media Agency, then one of the main skills we would have to pick up would be Ad Tech.

If you are new to Digital Marketing, then this map also serves as a nice way to figure out the broad horizon.

Now its your turn, How would you use this map?