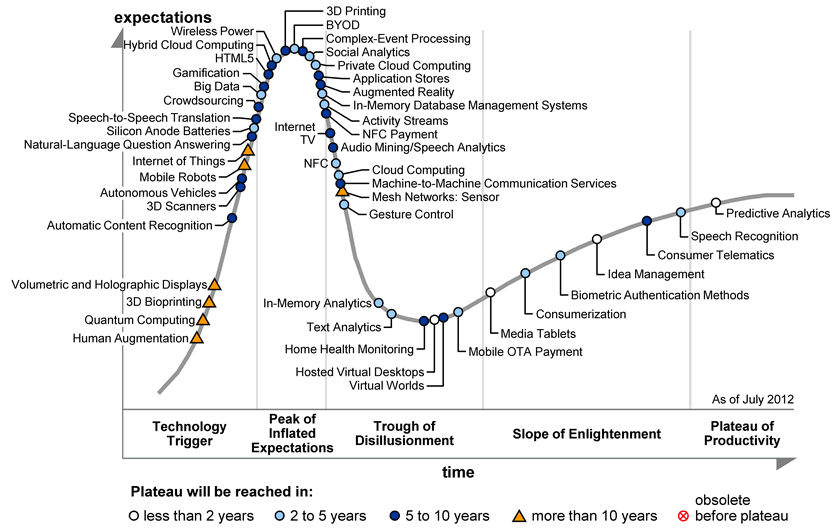 Every technology that is embraced by the world goes through a process of adoption. Gartner instituted this as the hype cycle.

What is the Hype Cycle?

The hype cycle talks about how any technology goes through the process of being talked about, being heralded, being written off and finally being adopted in mainstream businesses.

The graph you see above you shows the x-axis as the different stages of technology adoption, starting from the trigger or the invention of that technology, to the expectations of that technology by the enthusiasts, to the stage where it is discarded by early adopters to being finally understood and put to good use by smart users.

Obviously on the y-axis you have the expectations of the world.

Gartner brings in a third dimension to this graph by indicating a time period on when the technology will be a mainstream one. In this graph for example, the Cloud Computing technology is supposed to go mainstream within the next 2 to 5 years. This was made in 2012, so to interpret it correctly we should say that Cloud Computing will be embraced by all around 2014. People who are following the news of Cloud Computing can relate to the Trough of Disillusionment!

How do you interpret the Hype Cycle?

The hype cycle represents the time when a certain technology gets adopted by businesses. So, it has different implications for different people.

Learn to work with this technology early on, preferably in the Slope of Enlightenment phase. It will open up doors to many career pathways. Learn technology while everyone else is learning and learn it fast!

CTO of a start-up

Basing your product on a certain technology base will help your start-up catch the eyes of an investor. Your organization needs money and making the smart move to get the market talking about your technology adoption can get you that added PR. Keep an eye out for technologies lying in that Trough of Disillusionment phase, see how they can mesh with your product/services. Try a few prototypes, it’s well worth the efforts.

CTO of a mature organization

More often than not, you would be in charge of the operations team as well. In some few cases, you would also be the visionary of the organization (this should actually be your role). Try to find technologies which are about to hit the Plateau of Productivity and see which ones suit your requirements. It will bring efficiencies in your operations.

Keep in mind, that for most of these cases the idea would be to beat the competition in adopting a certain technology, so the focus would be on adopting the technology before it becomes mainstream.

At the end of the day, it is all Hype

Hype is after all extensive publicity. It is used to get the attention of people.

Bear in mind that if you do not want undue attention and if it is not broken, then you do not need to fix it.

However, some times you do get cues on possible disruptive technologies, be on top of those, since they have the potential to change your world. For e.g the way aeroplanes changed the shipping industry.

Sometimes all talk is still action!

People who are in Social Media would already know of influence monitoring tools such as Klout, Peerindex, and Rapportive.

I started using Klout the minute I discovered it using the Rapportive add-on for Firefox. Measuring and monitoring your klout score seemed cool. Soon after that I chanced on Peerindex as well.

The approaches employed by Klout and Peerindex are slightly different. Whereas Peerindex considered the reach of your tweets and conversations, Klout seemed to focus on the richness. Both the web-apps seemed cool, since both of them gave you an indication of what and how to increase your respective scores. So I managed to hike up my Klout score from the low 40s to the low 60s. I was happy with what I had achieved, until one conversation with Sushrut at a Tweet-up made me realize, that a high Klout score or a high Peerindex score is not really the outcome.

The business model that both these web-apps adopt to monetize their influence measuring algorithms is pretty much the same. Organizations that need to reach out to the influencers and decision-makers in their particular niches can now do so … at a price of course. Peerindex for example, charges 50 GBP for identifying a single influencer in the topic of your choosing. Of course there are people who are willing to pay, but the question I want to raise is till when?

I recently read this article on the openview blog, and found this great directory of twitterati – Twellow. One simple search confirmed this, the application is a directory of topic-wise experts, whereas this might seem commonplace, what this means for Klout and Peerindex is that their premium services now seem overpriced. Why would an organization pay a premium for the same information which is available for free?

Agreed, that Klout and Peerindex do provide “perks” for influencers, but at the end of the day, the deliverable for which the organization is paying up good money is to get twitter handles of influencers to start engaging with them. Perhaps, if the engagement can be somehow integrated into these perks … but till then I am firmly sticking to Twellow!

I just came across the Greiner Model for evolution of organizations. Pretty cool, needs no explanations!!