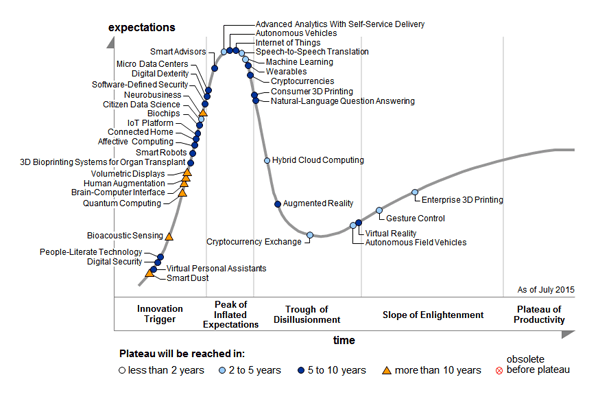 I have been following the Hype Cycle reports that Gartner publishes for quite some time (since 2008, if I remember correctly). There are multiple applications of the Hype Cycle, and for these reasons I keep myself updated whenever a new report is published.

This year the theme definitely seems to be on human augmentation and the Internet of things. Most of the emerging technologies which are plotted on the chart above seem to either be around augmenting humans with machines (Sheldon’s ultimate singularity) or around hooking up more devices on the internet.

Now, both these visions have been around for quite some time now. Often these visions are due to fiction (books, movies and so on) which gives inspiration to smarter minds to make the impossible possible.

But do take a look at all the previous Hype Cycle reports, and you will see an underlying theme –

Most of this is reliant on faster computing and better analysis. A movie such as Terminator seemed impossible back in 1984, but now we are already seeing some mainstream applications of artificial intelligence.

A Hype cycle is based on people’s interest and expectations and how that technology finally manages to perform. We always expect better and faster and stronger (and sometimes cheaper ;-)).