When I first heard about the idea, it sounded crazy. Crazy enough that it might just work!! Now kids, dont try this at home, you need a special set of conditions for this to work. You for one have to be Turks (since this strategy uses the Turks powers to the fullest). If your target happens to be Lakota (well you have hit the jackpot then!!)

Notice the above screenshot (its the 7th minute), what the Turkish player does is focus on booming, he builds many villagers (since they are cheap and fast), and gathers a decent amount of resources. With the surplus villies, he scouts for ruins. He ensures that he does Mil2 before he hits Classical age (that way not only military researches are cheaper, the siege is also available). On hitting Classical age, he builds not one but two siege workshops (since each workshop gives 2 free siege weapons for the Turks).

He also has ensured that he as a tower built, in Classical age, he researches Militia, which as we know is an extreme defensive tactic to fight an invasion.

Build a senate and research Despotism. That way your villies get a +2 attack bonus. Also build a university in the background and have one scholar at least, this is your back-up plan in case you fail to retain the capital – in which case now you can safely boom.

Now, the money move … he gathers all his villagers and converts them into militia. That as his defense for his siege engines, he launches an attack on the hapless capital of his enemy. 7th minute, 4 siege engines … that’s fast.

Like all rushes, this move also depends on knowing beforehand the location of the capital and scouting. 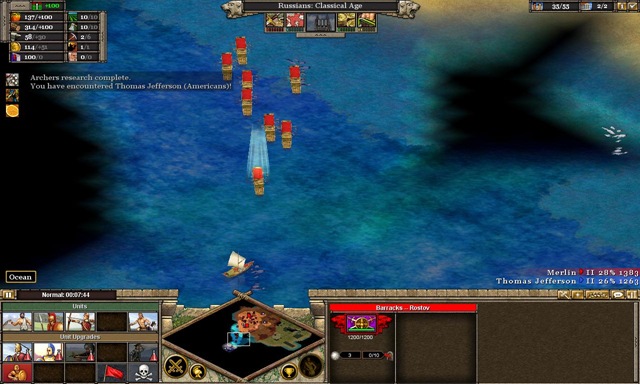 In continuation to the earlier post on Rise of Nations, I realized that rushing strategy changes once you are on a sea map. The complications are there because you need to go Sci1, Mil1 and Com1 (to build a port). That means time management has to be absolutely spot on. The ante of the gamble rises because by the time you have a sizeable army and navy to support the crossing, the opponent has gained significant advantage by booming. So one of the main decisions you have to take is – do you sacrifice economy or the element of surprise? Sea maps are generally long drawn out battles, and the quick rush at the start can really turn the tables. This is even more applicable against the AI. The moment you are across, the first thing should be to capture a city. That becomes your military base. All military upgrades you do on your home base, all unit production on your military base.

How do to Delayed Rush

Here is how I go about the delayed rush –

Now use your home base as an economic powerhouse, and the military base as the hammer and nail to drive into your opponents heart.

If you see the screenshot I have attached, I was playing against Americans, had managed to put two cities and launch an attack on the enemy shores. Found the second city, and took it. Then used it to take the capital and then the third city.

I have seen some folks wait for even some more time to research Mil2, and get some siege engines in place. That is also effective, but then to launch an attack you will also need some naval support to engage with the opponent’s navies. 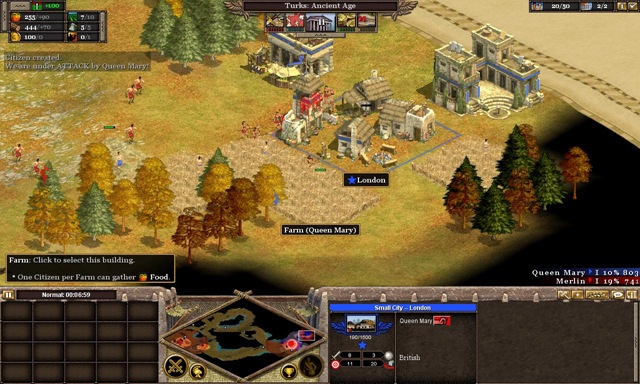 This is for all gamers who play Rise of Nations (and/or Thrones and Patriots). One of the most effective strategies is rushing early on in the game. I shall put it down with pros and cons that I have experienced in the last 18 months of playing the game.

What is a rush?

A rush is done by immediately launching into an attack and striking the opponent before he realizes what just happened. He might be building the 5th farm, getting ready to age, and boom! in comes your army from the darkness and takes his capital. Yeah … that’s what I am talking about.

How is it done?

Pretty simple really. It’s one of the oldest tricks in the book.

You can counter a rush. Here’s how –

In the screenshot I have attached, I was playing a 1-1 Arena match against a Tough comp (piece of cake). I started out with enough resources and a good civ (Turks – faster assimilation). I was not able to find the capital, so I took the city I could find (see the minimap). Then I got to see the border of the capital and moved towards that direction. By this time the Brit had made a barrack (+1 free archers). Fortunately I had 2 slingers to take on the archers. All is well :). By the seventh minute I had taken 2 cities and game over.

If you see that the map is a sea map and you have already started plans for the rush, then you need to change strategies a little bit. You need to go for a delayed rush, and switch from pure rushing to delayed rush and booming.