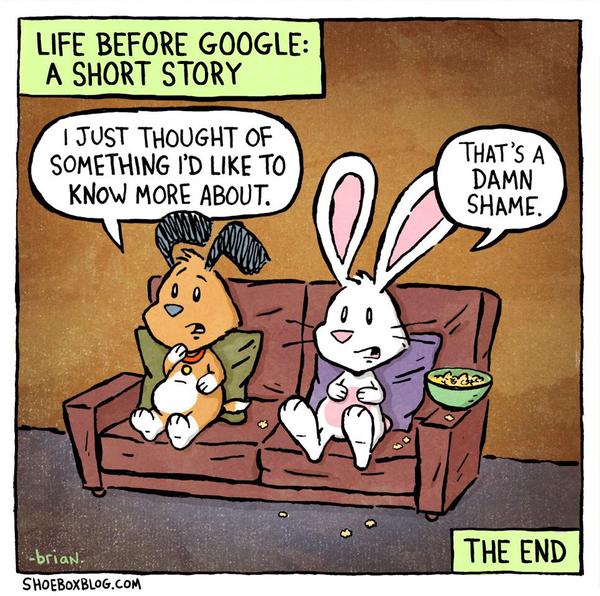 For all the awesome things that Google does, there are always concerns about privacy, data sharing and access to insane personal information. So much so that there is an interesting site out there in the blue nothing – One Day without Google.

This got me thinking. As a collective, we criticize the Search Giant so much, but if it were not for Google, what would we be doing now?

How would life be without Google?

What follows are just my speculations and thoughts, and by no means is written to demean other organizations. Pretty sure that without this company, the people how make the organization would still have gone and done many awesome things.

Before we begin re-constructing this hypothetical world, let me tell you that yes, I am a Google fan boy. I try out all things G and have done my fair shares of +1s, Waves and Buzzes.

I wake up and reach out for my phone to check my messages. Oh wait, my phone (Nexus 5) would not exist … I’d still using a phone to communicate.

Choice of purchasing a phone would have been very difficult. I would not have paid the additional money for an Apple product, I have tried and hated the Blackberry system. I would have been stuck with a Win8 phone. Probably, a Win8 powered laptop as well!

One part of my research would be oriented towards dual booting the Win8 and installing Ubuntu Touch.

To do my searches for this topic, I would most likely be using Bing. The search results would be pretty, but I would have to spend a lot of time trying to reach the relevant page.

All this would be a huge waste of time, and I’d most likely be almost late for work.

Without Google Analytics and Google Webmasters, most of the web analytics would be relegated to other packages. Urchin would be around and would possibly be the leader with Piwik fast catching up.

SEO agencies would be worshiping the one true god, Microsoft and how using the meta keywords tag in the page source would still be a relevant on-page optimization tactic.

Programming would be considered as a tough job and people would now have to remember the actual syntax of languages. All interviews being conducted would be to check how much the candidate can mug up lengthy API documents and language syntax.

The more elite of these people would be connected all the time to IRC channels to reach out to their peers and get quick solutions to their questions. The freshers would have to contest with dusty tomes such as Black Book of Java and PHP for Dummies.

Without search, Knowledge Management would be a librarian’s job. Perhaps, they would be paid much more. Words such as Big Data would actually be Big Catalogs and Big Archives.

Things would be far more hectic at home, and perhaps this is the one bright spot in this bleak future. My children would either be outside playing in the garden or would be reading books … instead of watching YouTube on their iPad and Tab.

Without YouTube and Chromecast, traditional mass media channels would still be prevalent.

Firefox would be the world’s leading browser, with Safari and Opera closing the gap. Enterprise users however would have to keep working with IE (or Spartan, it’s the same thing).

Without Google, the SPDY protocol would not be worked upon. The internet as we know it would be a scary place.

Interestingly enough, I would be still be able to blog (since I am on WordPress), however 80% of my traffic comes via Google Search, and I would certainly miss that huge chunk of traffic.