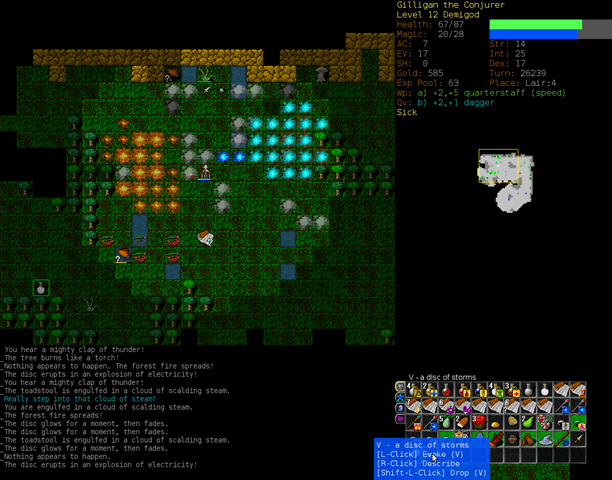 I am a huge fan of Role Playing Games (RPGs). Especially those which are random in nature i.e the dungeons are generated in real-time and not from a pre-made style.

The first RPG I really loved was Diablo, but the first real random RPG I played was Nethack.

So when I came across the mention of Dungeon Crawl Stone Soup on Questionable Content (it’s a comic strip), I could not resist myself. I just had to try out the game.

And whattay game!! A must see for all fans of any slash’ems. Of course I am not an elitist, and I prefer to play with a tile-set :-|

The mountain giant picked up a boulder and heaved it towards me. My female orc wizard ducked and narrowly missed the hulk of rock. I decided to take my Wand of striking and kill both the giant and the killer bee buzzing behind him in a single strike. The giant absorbed the magic and moved on to pick up the boulder for another shot. I smote off the killer bee with a couple of blows with my trusted +4 magic staff and turned to face the giant. The goliath had managed to pick up the boulder, now was the time … I took out another wand of magic missile and let go its fury at him. No effect. I would have to kill this one by hand-to-hand. No matter. The staff was up for the challenge and my mithril coat was unharmed. A fast flurry of blows was exchanged the giant lay bested at my feet.

No, this is not a dream. Its one of my favorite games, NetHack!! This is a single player game released in around late 1980’s … the development of this game has been completely on the net … and its a hack and slash game … hence net + hack = nethack :-)

Everytime I play the game, theres something new that happens. The maps are different, the characters are many to play with … and the game decides to behave differently on a full moon day!!

Just one more example of how a product has developed in a decentralized fashion over an open interactive medium (IRC and Usenets) to result in a customer oriented product.