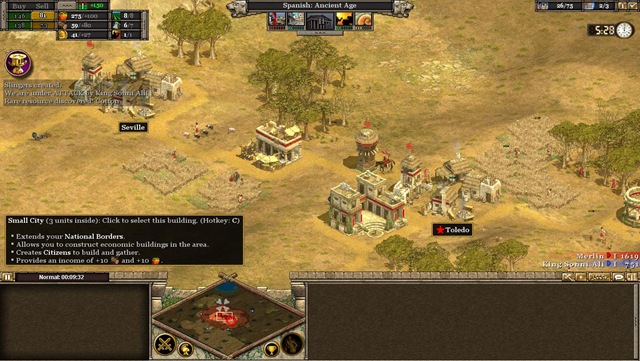 If you ever decide to explore the game without the multi-player aspect, then you are bound to check out the Conquer the World campaigns which are a part of the single player campaigns that one can play.

Barbarian Rally: Take control of a neutral territory in one of the early turns in the campaign and then defend your city against a constant onslaught of barbarians. It’s a defense mission, so increase the defenses around your city with towers and the like. Produce military units to remain close to your city and intercept the invading forces. The invaders increase over the course of the mission, so expect to be nearly surrounded in the mission’s concluding minutes.

I am playing in the Tough mode, so was expecting an early onslaught, the good part about this scenario is the resources that you are given. Be wise to utilize them properly. To reach the classical age, you will need to research 9 technologies, which is a resource hogging strategy. A better idea is to go into defensive mode and be prepared.

This strategy worked for me –