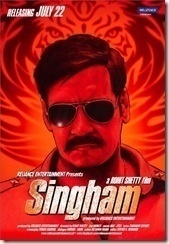 Yesterday was the world premier of the movie Singham, starring Ajay Devgan. World premier is just a euphemism to say that the distributors of the movie want to extract a bit more from television advertisements. The movie is definitely a non-stop entertaining watch, with eye-candy Kajal having some idiotic scenes, great action scenes and good sound tracks. A masala flick.

The reason movies such as Singham, Wanted (Salman Khan) and Nayak (Anil Kapoor) run at the box office, and become decent sized hits is simply that the people have become tired of the degree of corruption in the Indian system. Being tired is still different from being objective, and hence as a common man, we do not do any thing, however, in the movies, the protagonist takes on the corrupt system and by sheer force of his will (and lots of brute force) make a change happen. We like to believe in such a romantique notion.