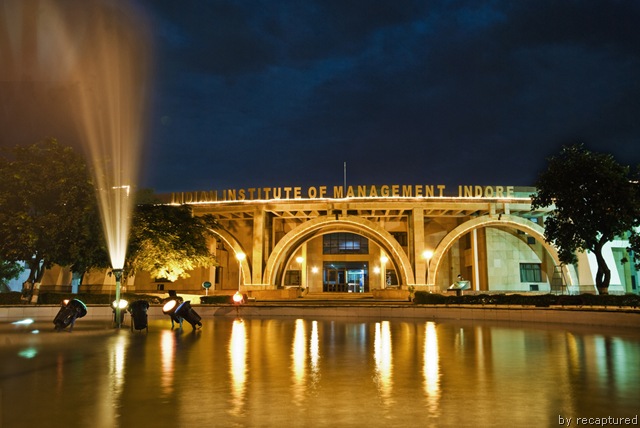 Last weekend was IIM-Indore’s alumni meet. Unlike the older IIM’s, we at Indore have this event every year for all the batches. And generally its one huge event in the calendar of the institute. This time was no different. For me, it was a whole new experience altogether.

My first alumni meet was in 2006, when I was a newly graduated “distinguished” member of my alma  matter. I knew everyone of my juniors, and even quite a few of their juniors. I knew all the seniors as well, so for me the meet was one big jalsa. I have fond memories of that meet … until this year.

Due to some reason or the other, I was unable to go to the next three alumni meets. During that time the institute had grown, it had doubled the intake of its students, teachers had changed, traditions had changed … and so had the culture. A young IIM does not have it’s fair share of P&G’s and BCG’s. Now we are not the youngest anymore … needless to say, things have changed.

I was aware of this, yet I decided that it’s time that I pay the alma matter a visit. As always, this involved talking to a lot of friends and rounding them up for buying tickets to Indore … some agreed straightaway (notably Amit Sharma amongst them), some complained that they already had other plans, and some said they will make it. Nevertheless, I had decided to go … and go I shall.

So off we go, October 3rd saw Amit and I in Indore going towards the mole hill. Lo behold, from far off, it looked still the same, a little bit weathered, but still the same old mole hill. I had big plans laid out for the weekend, in a nutshell it involved friends, loads of nostalgia, liters of booze and some good music and drunken dancing on the Melting Pot. Registration was fairly quick, there was some minor hassle about getting clean rooms and some beds and bed sheets … but that’s okay, we weren’t supposed to sleep anyway!! We were here to dance the night away!!! Except for one teensy-weensy hitch … apart from us two, no one else form my batch of 2006 had shown up … and the same for the batches of 2005 and 2007!!

By evening that day it was apparent that we were the most senior alumni there!! Brrr … I still get a shiver up my spine when the realization strikes me again … and again. All the traditions that we were a part of, were suddenly no longer being followed … the feeling instead of being one coming back to one’s home changed to one intruding someone else’s home. The alumni committee and the students were a welcoming lot though, all credit to them. But as someone has said, the people make the place … I couldn’t agree more. Just that those people were no longer there, the place wasn’t the same.

The feeling of loneliness in a throng of people was even more pronounced when we were asked to inaugurate the event. An honor generally kept for the most senior alumni, the oldies. OMG!! That’s me right there … lighting the lamp. In a tumult of emotions I realized that this was one thing which I would have relished doing had I been some guru in management, or atleast with enough grey hair on my head. Not when I am in my late twenties!! At least let me deserve it before I get to claim it :-)

I do not have the guts to go on, possible Amit can tell you more on this experience. Or I might come back and finish off this post some time later. Yes, and the photo that you see above is the academic block’s main entrance taken by Amit.