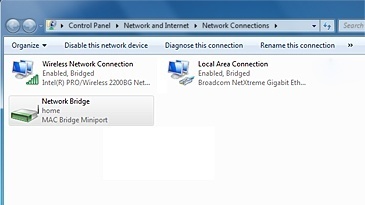 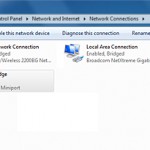 This is as a personal note to myself and to all you amateur gamers :)

Yesterday, I was at my sasural for some pani puuri and general chit chat. My wife’s cousin had also come-over. They have one desktop and one laptop over there, I had also taken my laptop over there. Enough for a mini-lan party :). So we were three gamers, with three machines and many multi-player games to play. The problem – how do we connect to each other and create a network? There are no switches available.

Fortunately, Ameya (that’s my saala) had a cross-cable through which we connected my laptop and his desktop. Then we took the other laptop and created an ad-hoc wireless connection on it, and connected that laptop to my laptop. So, my laptop was connected to both the machines on two different network interfaces viz., one lan card and the other wireless card. After this, I selected both the connections (in Network Connections) and clicked on Bridge connections. Thus a network bridge between the two connections was created allowing network traffic to pass between the two networks through my laptop. Voila!! The other laptop could now ping the desktop and vice-versa.