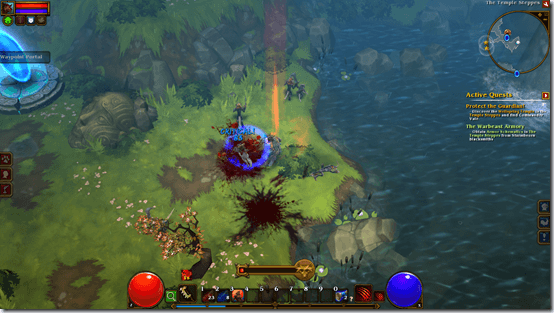 I had started playing Torchlight back in 2010, when Blizzard was sitting mum about Diablo III. During those days, there was a huge gap in the RPG space … a gap that needed to be filled with different Diablo clones. A gap which was completely satisfied by Torchlight.

Unlike it’s predecessor, Torchlight 2 is not only restricted to the city of Torchlight and the many dungeons underneath. It’s not your classic dungeon crawl, but instead it features an open world, where the adventurer can stumble upon other random dungeons for additional loot.

Torchlight 2 takes off right where Torchlight stopped. The plot picks up from the pace and throws you, the adventurer right in the middle of the story. The Alchemist (supposedly one of the heroes from the earlier series), has been infected by the ember and is trying to end all sources of ember in order to stop his infection. Our job is to stop the Alchemist and his nefarious plans.

What I liked about the classes, is that all four have distinctly different game playing styles. The trees and skill differences are also so distinct that it sets each variation apart.

That apart, the game can be played solo, on a lan or on the internet. All you need is a login with Runic Games. I have not really tried my hand with multi-player on this one yet, since I always (ALWAYS) like to finish the game first on solo and then go for the different variations.

Believe me, right now I am having much more fun than grinding/farming the different Acts in Diablo III. That’s a huge plus!!