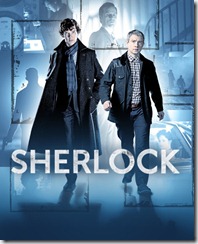 As a child, I was a fan of Sir Arthur Conan Doyle and his novels. Aside from the Sherlock Holmes set of mysteries, Sir Doyle has also written thousands of short stories … the Black Panther being one of my favourite. Sherlock Holmes as always is a classic. The way in which he explained everything as it was so simple to Dr. Watson made you awestruck at the Science of Deduction that Holmes always provided.

So Dr. Watson is an army doctor who gets shot in the shoulder (not the leg any more!) in Afghanistan! Dr. Watson also is seeing a therapist to discuss his psychosomatic limp (which explains his walking stick!). Holmes still has his set of eccentricities, however UK is a smoking free country these days, and he has to resort to Nicotine patches.

All in all, this series is a hilarious adaptation of Sherlock Holmes and his eternal struggle with James Moriarty. The modern age does not dull the edge of Sherlock’s deduction powers, but now they also have the aid of stuff such as GPS and tracking. If you are a fan of Mr. Holmes, then you definitely have to check out the first episode of this series, A Study in Pink (a different take on A Study in Scarlet).