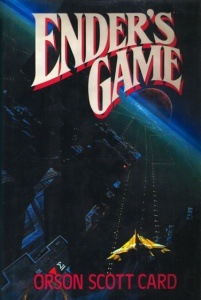 One day, in office, I came across this list, the best sci-fi novels of all time (according to Reddit). I was pleased at first as I browsed through the list … I had read the first two of them … as I went down the list … not one read! I had heard about some of them (relief!, but not more than 2 of them finished reading!!).

Off I went to Flipkart, and started ordering … in that order on the list.

Fortunately, this book was delivered to me last Friday. I sat through Sunday and finished it, almost in one sitting (there was a brief nap in the middle ;-)).

The thing about sci-fi novels is that when the author is writing the book (this one was in 1985), he has very less idea of what the future would be like. The rate at which things are changing is too fast, even for the imagination of the author. This is where Orson Scott Card dazzles. He has managed to forecast a future where public opinion can be swayed (and controlled) by digital media, space training facilities, colonization of other planets. While this might have seemed a bit far out back then, these days most of these things are very much achievable.

Ender’s Game is about a young child’s (Andew Wiggin) struggle against a system pitted against him to graduate and eventually save the human civilization from an alien species. I think Starship Troopers has taken some inspiration from this movie. Ender (or Andrew) is a born genius who thrives well under hostile circumstances. So the powers that be decide that for Ender to really sparkly, he has to be thrown into fire. And he is tested, again and again. This book is not about a boy who beats them all, its about someone who beats them, then gets burnt out … but beats them anyway so that he can rest.

There is an Ender in all of us. The tired feeling that we feel when we get burnt out … that’s Ender’s state of mind through out the book. It’s also about prevailing over that and continuing in classic human fashion. There are sequels to the novel, but what I like most about this book, is the attitude with which Ender attacks each problem. Do read the book.