I am in the middle of reading Shashi Tharoor’s An Era of Darkness: The British Empire in India. If you have been living under a rock like I was, then you may not have heard about his Oxford debate where he smashed his contemporaries on why Britain should do reparations to India.

At this time, I chanced on the movie Gold in Amazon Prime. What perfect timing! A movie about India’s first Olympic gold medal – as a free country. The movie stars Akshay Kumar as a sports manager of the British India National Hockey team, and their ability to keep winning the Olympic gold for British India. History buffs and hockey buffs (preferably both) would be quick to point out that during that time the team was led by the Wizard of Hockey, Dhyan Chand.

For the sake of preserving identities of the negative roles, the names have been changed, and Dhyan Chand is portrayed by Kunal Kapoor as the legendary captain Pritam. If you do not know who is Dhyan Chand, please stop reading and head on to the wiki link. India was well known in the history of hockey largely due to this chap. We owned the international circuit from 1928 (pre-independence) up till as late as 1980. Pretty much the time cricket took over as the national craze and the national sport lost its crowds. Ironically, in 2014 when Dhyan Chand’s name was being considered for Bharat Ratna (the highest civilian award in India), it was never nominated and the award winner was none other than apna Sachin!

But I digress, this is about the movie and not a diatribe about hockey losing out to cricket!

The movie is about getting India’s first Olympic gold, and how the main character in the story (a Bengali team manager played by Akshay Kumar) helps the team get its gold. This under the backdrop of the partition and post-independence struggles that the new country faces make for a riveting story.

Bollywood has oft taken an anti-Pakistan stance in the past, and it’s very easy to take this stance. However, you should see how this movie has spun the entire India-Pakistan tale. It’s heart-rending and one might wonder … a magnificent what-if … our national leaders back then were brave and foolhardy to take such a decision then. What stops from doing something equally foolish now?

History tells us the outcome of this story … India dominated the hockey scene for a long time. However, the story also talks about the role of administration in ensuring that the sport has enough backing. In the chaos of IPL and slogans like fan banna padega … I ask you this … what about our national sport? I wish this movie had done much better on the box office, it deserves to be seen, not only for the acting – but also for the narrative. 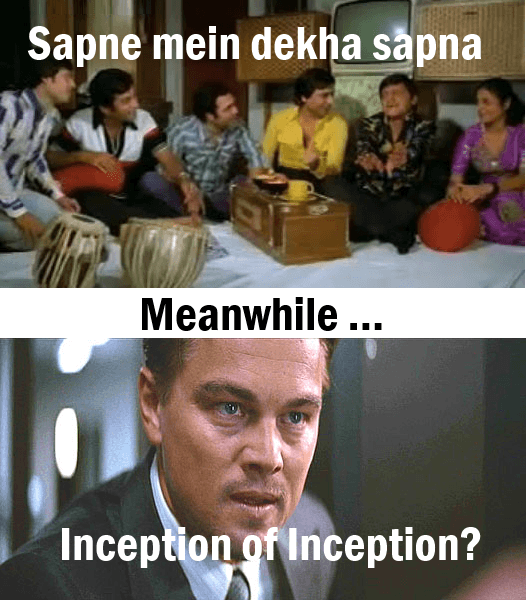 Was Golmaal the original the movie which sparked off Inception? Don’t believe me?

In case if you have seen any of the following movies then you will agree with me that almost all the protagonists in Bollywood do not know what are the different debt instruments available in the market these days.

Take the movie Om Jai Jagdish, or Hum Hain Rahi Pyaar Ke … or any movie where in the villain somehow coaxes either the hero’s family or woe be gone, the hero himself into an unsecured loan. Then when the hero is near bankruptcy, forces the hero to sell all family heirlooms and property in the classic filmy neelami. Fortunately, since all bollywood movies need a happy ending, the hero somehow pulls through by sheer dumb luck or hard work (or a script writer’s blessing).

Here is one – an individual voluntary arrangement (IVT). An IVT is a solution wherein the repayments can be lowered, the interest rates can be kept constant and it can more importantly stop the creditors from chasing our hero. Now all he has to do is click for an individual voluntary arrangement. He has to fill in some simple forms and within a few months, his bankruptcy problems will atleast be averted. This form of debt management has been around for some time now, and is making headway in the UK. In the past year or so, BBC reports suggest that many individuals are opting to go this way instead of simply declaring bankruptcy.

You can find more about IVT, simply google for it or find the wiki on this. Now if only our Indian heroes were that smart and could keep up with the times! Not only would it save so much heartburn for their family, but would also save so many reels of trashy melodramatic cinema!