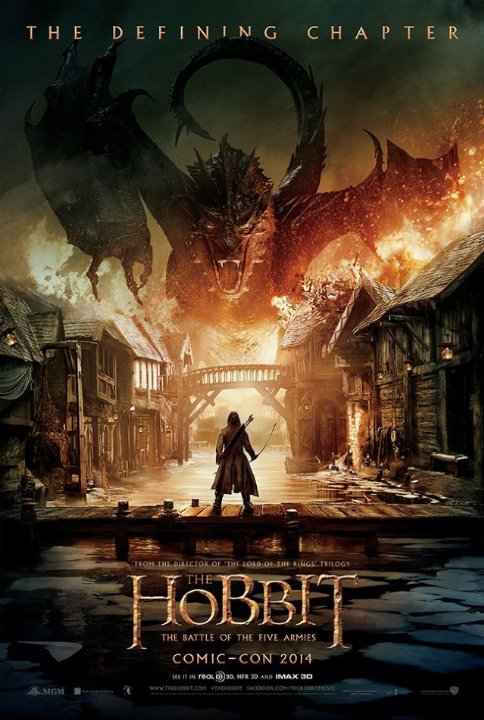 For the past couple of years I was waiting to see how Peter Jackson treated The Hobbit. His Lord of the Rings trilogy was a treat to watch, and although many plots of the book were left out, the trilogy remains one of my favorite.

The Hobbit on the other hand is much smaller, and uses the lore already built around Middle Earth. This was why, watching the movie was an entirely new experience for me. Take the Game of Thrones series, where the episodes match verbatim scenes in the books … the Hobbit’s treatment adds an interesting angle to the way Peter Jackson has unfolded the story for all of us.

Warning: If you have not watched the movie yet, stop reading, this is a SPOILER alert. I generally do not reveal plots, however I make an exception in this case … there are multiple aspects within the movie which I wanted to rant and rave about :-)

The movie starts with the show off between Bard and Smaug. Surprisingly, this part of the movie I think could have done better. There is too much chaos to start off, and suddenly amidst that chaos, and there are scenes where a more human aspect could have been showcased viz., the father and son v/s the dragon scene.

The audience however is treated to some great visuals on the way, and that’s where Jackson is right on the money. No one is going to remember how far the story has deviated from the plot, as long as its done well with some pretty FX thrown in.

Don’t get me wrong, I loved the movie!

The movie is made for an audience which may or may not have read the book. It does not assume that the audience has read the book. This is one of the reasons why I liked the movie, it does not alienate the readers nor does it keep the non-readers clueless about the more nuanced sub-plots within the movie (the scene between Galadriel, Elrond, Gandalf battling the ring wraiths for instance).

The Dragon is slain and that starts the movie for us. Remember, the mountain contains a hoard of gold, and everybody was afraid of approaching the mountain because of the Smaug. Now with him dispatched, everybody wants a piece of that hoard.

Thorin closes all access to the Lonely Mountain and backs down on his own words. This leads to an alliance between the army of Men (led by Bard) and the army of Elves (led by Thranduil). The allied forces come to a stand off on the gates of Erebor.

This is the point where the third army is introduced in the mix, the Dwarves have called upon their cousins from the Iron mountains. We see Dain the Dwarf, the cousin of Thorin come to the aid of the line of Durin.

Meanwhile as Gandalf and Bilbo realize in shock that instead of fighting the enemy, the Dwarves, Men and Elves are going to fight each other. This with Thorin refusing to listen to any counsel.

This is the point where Azog chooses to attack the three armies with his massive army from two sides, one from the south and the other from the north.

What happens next is an epic battle that has been well shot. Unfortunately to keep the movie within normal range, a lot of the scenes are cut from the theatre reels (the dwarven wagon race on ice v/s wargs is completely removed).

The fifth army (in case you are wondering this), happens to be the army of Eagles that rush in to save the day.

The sub-plots and the deviations

The character Tauriel is not part of the book. She has been created for the sole purpose of adding romance to the movie series. Evangeline Lilly has been cast in this role, and she plays the Elf Captain role very well.

Her relationship with the Dwarf Kili and the Elf Legolas is slowly unfolded for the viewers. It’s a story that’s not overly stressed upon (in the middle of the battle), but it’s still present nonetheless.

Unfortunately, this romance is but a tragic one, with Tauriel crying over Kili’s dead body. A quote from the movie that kind of sums up the love that Tauriel had for Kili is –

If this is love, I don’t want it. Take it away, please! Why does it hurt so much?

There is an untold story there perhaps, which ensures that unlike all goody goody movies where all loose ends come together in the end, we have more subplots opening up.

That also lays foundation for the Lord of the Rings trilogy and this movie does pay a heavy homage to it’s legacy. When Thranduil advises Legolas to seek out Strider, we all know who this great man is

Go to the North. There is a member of the Dunedain you should meet and stay with. His father was a good man, I have hope he will be a great one.

There of course, remains on sub-plot to be discussed, and that is the exact relationship between Galadriel and Gandalf.

There are multiple scenes in this trilogy that make the viewer think that there is a deeper relationship between these two. In the LOTR series (as well as the Hobbit series), there are multiple times where Galadriel has sent aid to Gandalf. The skirmish with the ring wraiths also shows that Galadriel is one of the most powerful people on Middle Earth and cares for Gandalf.

However, the literature on this only indicates a friendship between these two and nothing else!

Finally, it’s a Home that we seek

Richard Armitage has played Thorin beautifully. The way he stubbornly holes up within the mountain, refusing to listen to rhyme, reason, honour and friends is great.

I liked his parting words to Bilbo …

Farewell, Master Burglar. Go back to your books, your fireplace. Plant your trees, watch them grow. If more of us valued home above gold, it would be a merrier world.

There is immense wisdom in those words. It also draws onto the fact that the dwarves took this quest just to reclaim their home, Erebor. It’s an epic written on wanting to return back to one’s roots.

All in all, a great movie to watch. Not just for the FX but also for the wisdom in the words, and the lore of Middle Earth.