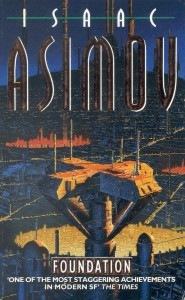 For some reason, I had stayed away from reading Isaac Asimov. Probably because I had seen some of the poorly done movies based on his books. I finally gave in, and started reading Asimov … Foundation being one of the first novels I got my hands upon.

The story is set in the far future (as is true with most Asimov novels), where the world (or the galaxy in this case) is ruled by an uni-polar government. The human race has advanced far and wide across the galaxy, and has inhabited many planets (25 million and counting). Technology has advanced so much that it is making humans complacent, and hence the cause of its own decay.

This macro-view is held by a visionary (Hari Seldon), and he creates a mission to set two different worlds set at the ends of the galaxy to re-build the human civilization after its fall. The story takes us through the different phases any civilization will face in its rise to power. The government structures, the role of religion in controlling the masses, the role of science and trade in conquering other civilizations.

The original foundation trilogy is very well written and Isaac Asimov shows why till this date he is one of the top read authors.

Get your copy here!