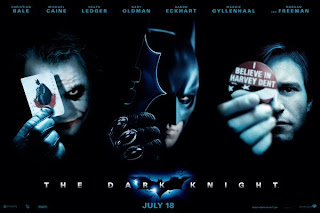 Saw this one over the weekend, and yes … the news is out. We have a winner here … pro’lly the best batman flick ever!!

It’s a whopping 9.7 on IMDB, ousting Godfather from the top spot is a feat … a huge feat!! The reason?? I believe the movie is not like your run of the mill batman flick, with chics, action and baddies all over the movie. It goes deeper into explaining why the characters are as they are … why Batman has to be a vigilante, how is police officer Gordon promoted to the Commissioner post. Why is the Joker who he is … why does two-face hate Batman’s guts.

The casting of the movie is superb, with acting greats like Gary Oldman, Morgan Freeman, Michael Caine (playing the role of the wise Alfred). The action scenes are realistic, the characterisation is superb, if you are a Batman fan, this is your Meccah!!