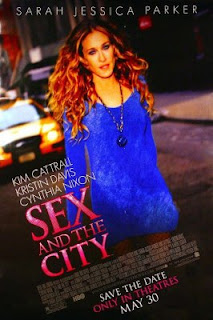 HBO was the channel which aired Sex and the City for the first time in India. My sister and I were immediately hooked with Carrie Bradshaw’s witticisms and her troupe of friends. Lily’s innocence, Miranda’s pragmatism and the exploits of Samantha were a fun to watch.

Keeping those episodes in mind, I decided to go to the movie with my roomies. Its like watching the old characters that you love, except now that they have gotten old and have moved on from their characters. Its the same with meeting old friends … you are glad to see them again, but you notice small albeit significant changes to their characters … not to mention wrinkles :-).

All in all its a good movie, but I still prefer Mr. Big and Carrie in 20 minute dosages. Go give it a whirl only if you are a die hard fan.

4 thoughts on “Sex and the City”