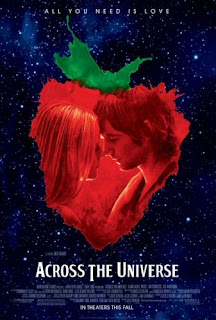 Hell no, I am not a Beatles fan. Or at least was not until I saw the movie Across the Universe. The entire movie is scripted in such a fashion that atleast one Beatles song would be applicable in that scenario. The movie talks about how an irishman comes to New York searching for a meaning to his life, falls in love with his best friends sister, only to loose her to the revolution. And then how love conquers all bringing the two people together. In the middle it meanders between the Flower Power of the sixties and the seventies, to protesting against the Vietnam war, to facing the horrors of the war, psychedelic music and love.

The movie is a refreshing concept with around 60% of it being songs of Beatles and the like. What I am trying to say that its not like a conventional movie … at one point of time I was thinking … ye kya ho raha hain. But it cleans out nice in the end and love conquers all. You know what?? That’s the third english romantic musical that I have seen in the last month. All of them being good hits on IMDB. This one is a 7.7. Definitely a sign that film goers have started warming up to musicals and romance. The good vs. evil formula seems to have gone out, and now its love wins all.

Would it not be cool to have the songs which go on in the background … I get by with a lil help from my friends … I love you yeah! yeah! yeah! … I am walrus! Koo-koo-kachu … what’s your song?

4 thoughts on “My life is a Beatles Soundtrack”