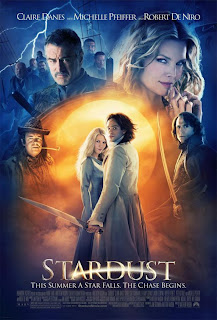 With an 8.0 rating, it was a sure shot plan for this evening. And with such a star studded star cast like De Niro, Michelle Pfeiffer, Claire Danes, Pete O’Toole … I kind of expected a lot out of this movie and frankly speaking I was kind of let down.I dont know, maybe its just me … but I feel it could do a bit more. Claire Danes and Pfieffer could have put in a little bit more … but thats the way I feel.

Had I gone to the movie without any preconceived notions, then I would have enjoyed it a lot more. Well … De Niro’s role is enough for the paisa vasool factor. In fact, now that I think back, the casting is the one factor which has pulled the movie into the higher ratings. Its a fantasy movie that takes place in a magical land of Stormhold, which just so happens to share a “wall” with England. Beyond the wall in Stormhold, lies a whole different world of magic, wizardry and fantasy.

Of lightning bolts that can be sold, of flying pirate ships, of unicorns and of course of witches. Enter Pfeiffer, who plays the evil sorceress poised to take Claire Dane’s heart for her eternal youth. Original plot … indeed.

Theres a hopeless romantic within all of us. Its there within me, I endear it. This movie appeals to that silly person who likes the entire love-conquers-all concept. Thats why it is liked by people of all ages.

Normally I am not into this, I prefer to watch my movies on an IMAX screen, or off a .torrent. In fact, there is a VCD guy just below my flat that rents out good titles at a very affordable price. I generally do not rent out movies.

A couple of weeks back, I came across a site – 70mm. Its a portal where you can login and rent out movies, the ones which are on the catalogue. If its available, then they will contact you and deliver the DVD/VCD at your doorstep … Cash-On-Delivery (COD). How awesome is that!! I dont even have to get off my chair :-)

Since there is a dearth of marathi movies in Hyderabad, I did try ordering a DVD of a recent marathi movie – Savalee … lets see how this pans out. Will report on this further.

Have any of you watched the movie Kya Kehna – its the one in which Preity Zinta gets pregnant while still being an undergraduate. The entire movie is one sob story followed by next, how the society shuns her, how her college shuns her, how Preity’s character simply buckles under all the pressure … well, I have to confess that I could not stand to watch the entire movie. I had to switch the channel, I do not like to watch people roll about in their self-pity.

That is precisely the reason why I loved Juno. The outline of the plot is the same … Juno, the main character of the movie, finds out that she is pregnant. The first 30 minutes go about in how the news has impacted her and all her friends … her parents, and their reaction about the news. The fresh perspective comes now … her parents accept it naturally and extend her the much needed support. Her friend also helps her out in her own inane way … by finding out a surrogate family to whom Juno can donate the child to. Juno meets the loving family, and decides that her baby would be safe with this family. The baby’s father is Juno’s good friend Bleeker (played by Michael Cera from Superbad) who is completely unaware and not there during the entire pregnancy. The movie has its fair share of twists and turns … where we are forced to think about relationships as the plot unfolds.

Juno is shown as the unpredictable, cool chick who is simply not ready for this, and yet she takes this on and goes through it … without victimizing herself. Without feeling sorry for herself at any moment. And thats why I loved it so much. Definitely a 8.2

Had gone to Mumbai over the weekend, my mother talked me into watching this movie on Saturday night. Since I did not have anything else to do except visit my ophthalmologist, I complied.

It has been over 4-5 years since I have watched a marathi movie in a theater. And I was pleasantly surprised with the new age of marathi movies coming. Valu in marathi means a bull which is unleashed in the wild, it is not to be tamed and not to be tampered with either.

So the movie starts off with a no-nonsense forest officer who is dispatched to capture a rogue wild bull who is disturbing the peaceful proceedings of some nondescript village. The forest officer is miffed at this prospect, that such an important person like him is now relegated to capturing wild bulls instead of leopards and their ilk. Nonetheless he goes there, along with him, comes his younger brother … and his video camera. The entire movie is about different perspectives from different villagers about one problem. A wild bull. If you do understand marathi, then definitely worth a watch.

What is more interesting, is how the movie was made. The producers of this movie are not your regular Sippy’s and Bokadia’s … they are not even millionaires, they are simple middle class people like you and me. The aam aadmi of Maharashtra. How did they come up with the moolah? Well, through their friends, relatives and friend of their friends. Talk about Movie 2.0, huh? 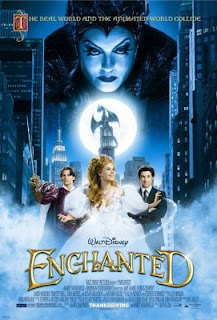 When I was a small kid, I used to absolutely love reading fairy tales. My grandfather had bought these two hardbound volumes from the seven seas yonder that were absolutely full of them. I never managed to completely read the book end to end, but I had read a lot of them.

Then came school, junior college, engineering, work, mba, work and with all of them, the facts about life. Now I am a person who can safely say is well-grounded in reality. So much so that I have more or less stopped watching cartoons, even Tom & Jerry, which my father still loves and laughs out loud like a small child when watching the same.

Disney and this new movie, Enchanted brings out that mirthful child in all of us. I had an absolute rollicking time throughout this movie.

The plot is simple, a fairy tale couple (prince and princess, with their chipmunk friend) are thrown into reality by the wicked witch step-mother. The princess is hurtled into Earth and this guy who is your normal Joe, who also happens to be a divorce lawyer. As the plot thickens, by and by, reality also has its effect on the fairy tale world and I wont spoil it, please watch the movie :-)

After a long time have I seen an all out movie, the likes of Cinderella or Snow White, et al. A musical cartoon flick which turns into a romantic comedy movie. Very nicely done. I think I will try to get my hands on the digital version of this movie. Definitely an 8.0